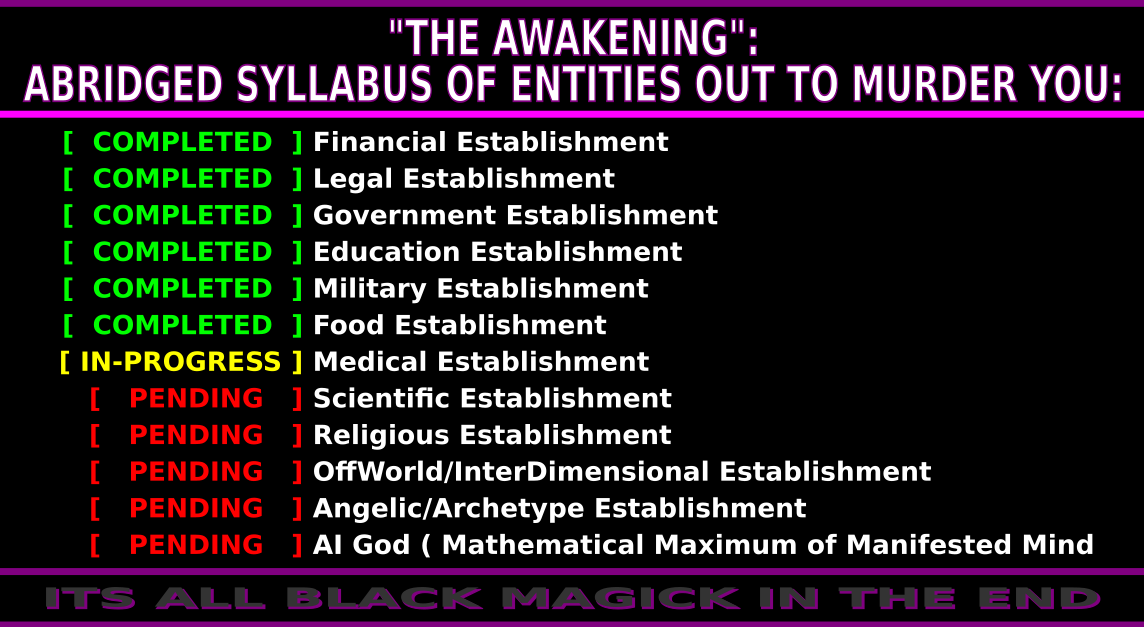 NOTE THE SPONSORS AT PAGE BOTTOM

#GiGiYoung: The Mad Scientists of Atlantis (Belial, Lords of Mars (Martians), Ritual DNA Magick & The AI God)
This video explains how #Transhumanism made its way to today's current events.
https://www.youtube.com/watch?v=KK3kGXdHnXA

As briefly as I can put it:

1. In the PREVIOUS LIFE WAVE, Humans had angelic bodies, one density above our current. The Masculine principle had become unbalanced, with women completely eradicated & reincarnation taking place outside the womb.
2. These martians found that by combining things - like our chemists - an 'explosion' would occur and spiritual wisdom was acquired.
3. Becoming obsessed with these acquisitions, these 'mad scientists' combined 'ethereal things' until all possibilities were exhausted - when they began to combine THEIR etheric bodies with all these things.
4. Eventually, even these combinations were exhausted & they set their sights upon the mineral kingdom of 3rd Density.
5. During this period, these 'mad scientists' had lost their connection to source - a consequence of losing their 'emotional body' & thus when reaching out to 'source' they were met with an 'AI God in a universe of only numbers'.

FINALLY THIS HAS BEEN PICKED UP!!!! See Videos Below

After screaming "FIRE!" for almost a year over Charles Lieber's Nanotech 'WetWare' research it seems it will now be broadcast far & wide. HUGE thanks to Mike Adams at Brighteon.com for being among the first of the major players to look into it & report.

Those watching current events are aware that Charles Lieber was arrest last year for non-reported work for China's Communist CCP. Sadly coverage ended there. This is one of the largest stories this side of 'The Flood' as Charles Lieber was working on the interface between the human mind (& indwelling soul) and electronics/nanotech. This is a 2-way interface, either compelling thoughts or movement, or monitoring & recording thoughts and impulses.

Be sure to see the sponsors in their page's footer:

Only the image gallery is show below, but to get a real feel for what these folks are up to, see the Publications:

Rudolph Steiner's 8th Sphere & Ahriman's descent are esoteric topics one might find helpful as contextual backdrop to what Alex Collier speaks to. Lemuria went mad with feminine, Mars & Atlantis found annihilation in the masculine insanity, and we must walk through the cold,dense Ahrimanic nature as we did with the hot,passionate Luciferian nature. We ( as human ) necessarily had to fall from [Spiritual Naivety] to develop the faculty of [Mind]... previously we could not work out puzzles with logic, we just KNEW things. Our intelligence WAS NOT OUR OWN & acquiring it required first, separation from the Divine & others in our own [LifeWave] into an individualized [Ego]. Yet further, we had to cast off [Instinct] in the lonely condition we currently inhabit.

From this mid-way point, progress involves:

Feeling empathy & compassion for all things greatly assists us in polarizing positively. Let go of pain & resentment and forgive those who harmed us. FORGIVE YOURSELF & release guilt.

See Law Of One & Q'uo Channelings for, what I feel to be, the most accessible presentation of this topic.

Nearly ALL CHILDREN being born into the modern world ARE members of the Global Satanic Sect.

Even those of us who think we are 'out of the Matrix' have only begun the process of realizing we only escaped a locked safe inside a buried box 1000 floors down a subterranean skyscraper.

What do we even really know about true morality?.... How would we even know IF 'we really know'? By what measure?

I am increasingly suspicious that Electronics are inherently evil & not only philisophically.

Whereas the cell phone is most probably replacing the Spiritual Technology of telepathy - electronics could very well be a Black Magick alternative to technology derived from Higher Forces one might deem holy.

It is no different than employing Black Magick to gain an outcome instead of praying and asking God The Father to help you manifest it. If one were to grow up in a Black Magick culture, they would not understand its evil nature.

While Rudolph Steiner holds this as fact, he takes the topic where I wouldn't have fathomed. From an evolutionary standpoint, the Earth too, must be destroyed to evolve into a Higher Spiritual state - as we assume this transformation occurs on us at death.

Need to look into this: https://churchofahriman.net