Parkland Rabbis: ‘The Tragedy Is Still Unfolding in Our Community’

Even after the bullets stopped—and the students and adults who were murdered were identified—Chabad rabbis in Parkland, Fla., say the tragedy in their community is just beginning to unfold.

“This is a small community, where nearly half of the population is Jewish, so everyone has been touched by what has happened,” Rabbi Shuey Biston, director of outreach and development of Chabad of Parkland told Chabad.org. “The phones at Chabad have been ringing off the wall as people come for emotional, spiritual, and material support.”

Of the 17 confirmed deaths, the rabbis believe that at least six were Jewish, including an adult security guard. Several of those killed were participants at the Chabad centers in Parkland or nearby Coral Springs.

Biston says that Chabad rabbis have been working closely with Broward County Sheriff Scott Israel, who is a congregant at Chabad, to ensure that the bodies of the Jewish dead are released for burial as soon as possible in accordance with Jewish tradition.

Chabad has also enlisted the help of several therapists who have volunteered to counsel students. Observant Jews, they are uniquely positioned to provide both clinical and religious support.

This morning, several teens who had survived the massacre came to Chabad to recite the Hagomel blessing of thanksgiving at the Torah. One of them had filmed the shooting. “Obviously, these teens are still in shock,” says Rabbi Mendy Gutnick, youth director at Chabad of Parkland. “There is one girl we know who was standing between two friends who were shot dead. How can she not be scarred by something like that?” 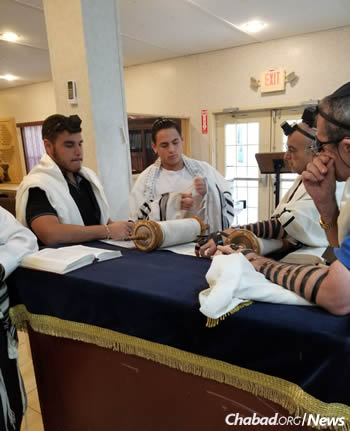 Tonight at 6 p.m., the Jewish community will join together for an evening of prayers and words of support. The gathering is a concerted effort of a number of area Chabad centers.

“There are no words to say at a time like this,” says Gutnick, who spent the night praying with families who were awaiting word on the fate of their children. “All you can do is hug, cry and hold each other close.”

At the same time, the rabbi says he has been telling people that it is imperative to channel their shock and grief into positive action. “We each need to carve out a little bit of brightness in the darkness that has engulfed our world,” says Gutnick

“Reach out to a grieving family, even if you do not know them. Do something, anything, because ultimately we need to be able to tell our children that the world we live in is good.”

Parkland Rabbis: ‘The Tragedy Is Still Unfolding in Our Community’